A Solution for Citrus Greening Disease

Download this as a pdf in English:  Citrus Greening Disease or Kreyol:  Maladi Dragon Jon 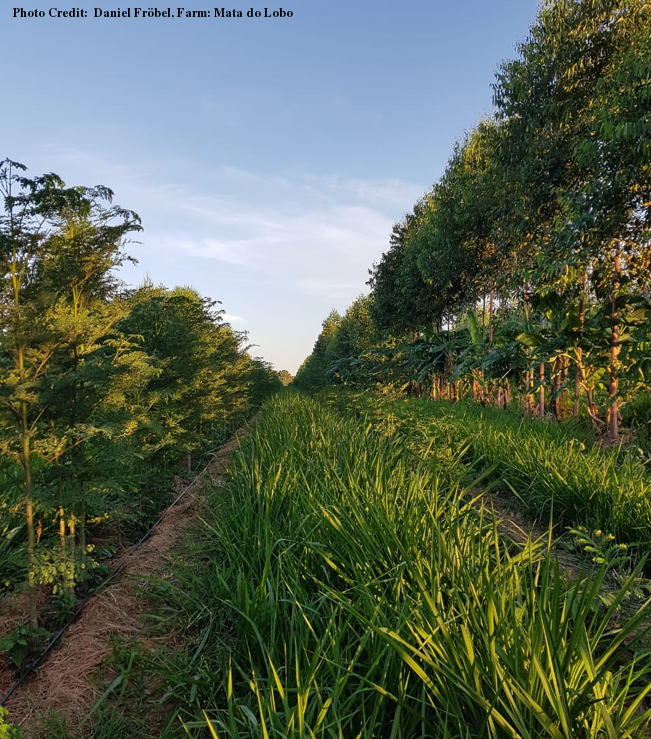 An agroforestry system with a future focus on coffee

Citrus greening disease is a bacterial disease transmitted by insects and sometimes also through grafts. It is massively impacting citrus production worldwide and is thought to be incurable. This article presents a promising solution proven in Brazil. An agroforestry method, developed by Ernst Götsch, often referred to as syntropic agroforestry, has been effective in both preventing the disease and even partially reversing it in previously infected trees.

The farm where this method was applied, wishes to remain anonymous, because the initial results were not carried out as a rigorous scientific experiment. But now that it is clear this agroforestry system is highly effective they have started a formal trial, which is expected to be published in 2023. In the spirit of sharing, the early results are described in this article for those who are willing to explore this solution, even before the formal publication is released.

In 2012 a farm which was focusing on citrus production hired several of Ernst Götsch’s advanced students to design an agroforestry system. This farm is located in a region that has been hit hard by greening disease. Thousands of hectares of citrus have been destroyed and removed in nearby farms because of greening and some of the citrus trees on the farm were already infected.

A section of the farm was planted using a shaded agroforestry design according to Ernst Götsch’s specifications. This was quite different from the rest of the farm which was planted using a traditional full sun design. At first, Ernst’s students were not successful in finding the correct way to manage this system, which resulted in it being too shaded. Ernst says that successfully using his approach is 10% in the design/planting and 90% in the management.

In 2014, Ernst himself visited the farm and found the best management approach. He recommended a more aggressive pruning schedule which brought more sun to the citrus trees just before the time of flowering. The farm grew primarily Valencia oranges and tangerines. On some of the land, greening had already been present, yet in other areas there was no sign of disease. Because Ernst’s influence on the farm came in steps over a few years, it happened that there were 3 different types of systems which could be compared; 1. Full sun 2. Shade with bad management 3. Shade with good management.

The 3 systems performed very differently: The traditional full sun was an ineffective system. It resulted in high disease rates (80% of the citrus developed greening) which quickly progressed to the point that the orchard was unproductive. The “shade with bad management” system resulted in lower disease rates (30% of the citrus showed signs of infection) but as the shade increased, the infected 1-2 year old trees showed signs of disease reversal. The heavy shade resulted in a substantial loss of fruit production, and so this system was not practical. The “shade with good management” system was the best approach. It stopped disease when present (in young trees) and strongly prevented disease from ever infecting the trees, while still maintaining good fruit production.

In a 2 Ha section of the farm where greening had already infected most of trees, the “shade with good management” system quickly revitalized the diseased trees. Within just 3 months of the first pruning intervention, the trees showed new healthy growth sprouts at the base of their trunks. The sprouts had large new leaves and were forming a new trunk. Little by little the old diseased parts of the trees were removed using a clean, sharp, pruning saw. Within 12 months the trees had fully developed canopies (about 2 X 2 meter canopies) and were heavily loaded with fruit! Only 3 citrus trees in the entire 2 Ha plot, which had been 70% infected, needed to be removed because they showed no signs of recovery.

Although the sun was beneficial for fruit production in this section of the farm, the greening disease also seemed to become more active in the trees during the time of increased sun exposure. It was felt that even with the best design and management, the greening disease was not entirely eradicated from the farm and the infected trees were determined to be too risky to keep. For this reason, all the systems with some greening disease were ultimately removed in 2016 and the farm was renovated using the third system “shade with good management”. Since then, this system continues to be managed according to Ernst’s recommendations, with the exception that they also include the use of fungal sprays (Isaria sp) to control the psyllid insect which is a known vector for greening. This approach has been effective. This system remains highly productive and healthy, even now 4 years later. Greening disease has infected less than 1% of the citrus on the farm!

Some of the key features of Ernst’s system that helped the trees recover and thrive include the following:

The shaded system was planted according to the following design; citrus trees were planted every 2 meters in rows that were 6-7 meters apart. In the tree rows, in between each citrus tree a banana plant (tall species, not dwarf species) and a biomass or climax tree was planted. The biomass trees were 40% eucalyptus and the remaining 60% were a mix of high and emergent stratum trees from 13 species such as albizia, inga, gliricidia, etc. Some of the remaining 60% biomass trees were climax emergent species (such as mahogany) and were planted with a large spacing (about 12 meters apart) and allowed to retain at least part of their canopy to ensure proper shade for the future.

In the area between the tree rows (B-area), perennial grass was grown. Mombasa (Panicum maximum) was intended to be the main species because of its fast growth and high fertility. However, heavy tractor traffic resulted in soil compaction in some areas and that was not compatible with mombasa growth. In these areas Brachiaria decumbens dominated. 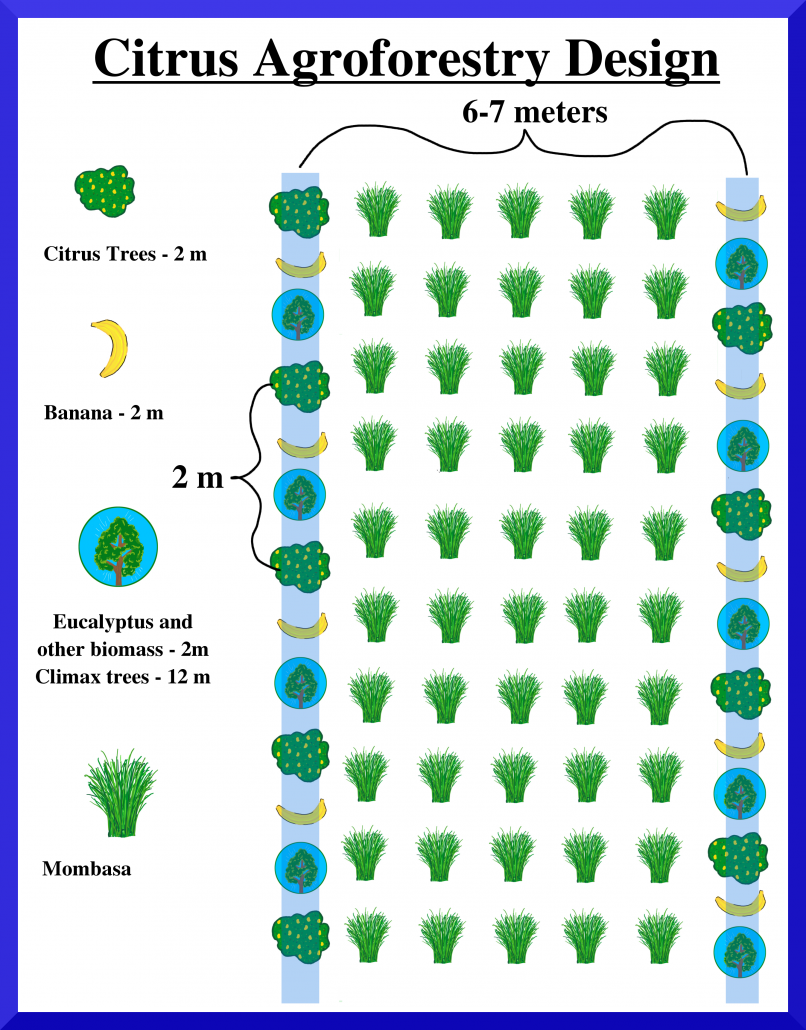 Although this area was initially planted according to Ernst’s recommendations, the following management strategies were carried out between 2012 and 2014 against his advice;

When Ernst was invited to the farm in 2014, the following was done according to his recommendations: 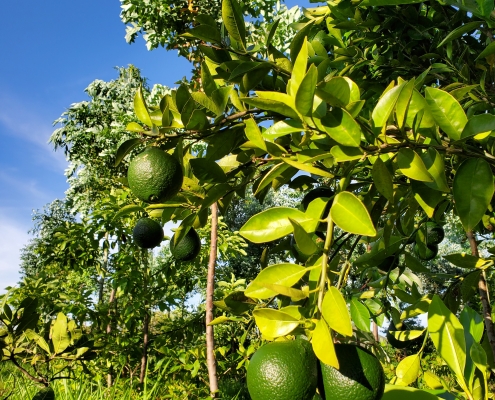 Citrus in an agroforestry system at CEPEAS in Goias

The tree receives an apical cut at 5m and the lower branches are removed. Notice that some branches are left intact near the top, to encourage good regrowth and those branches are cut back so they do not overlap with adjacent trees. 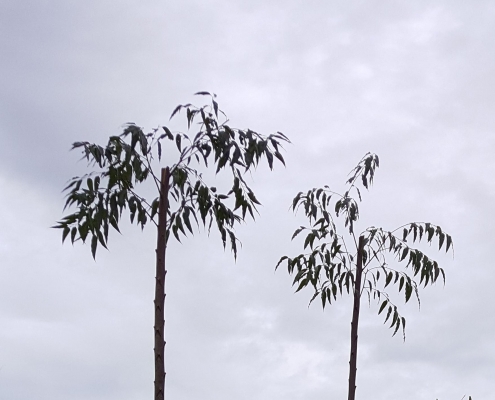 Pruned eucalyptus tree at the CEPEAS research farm in Goias 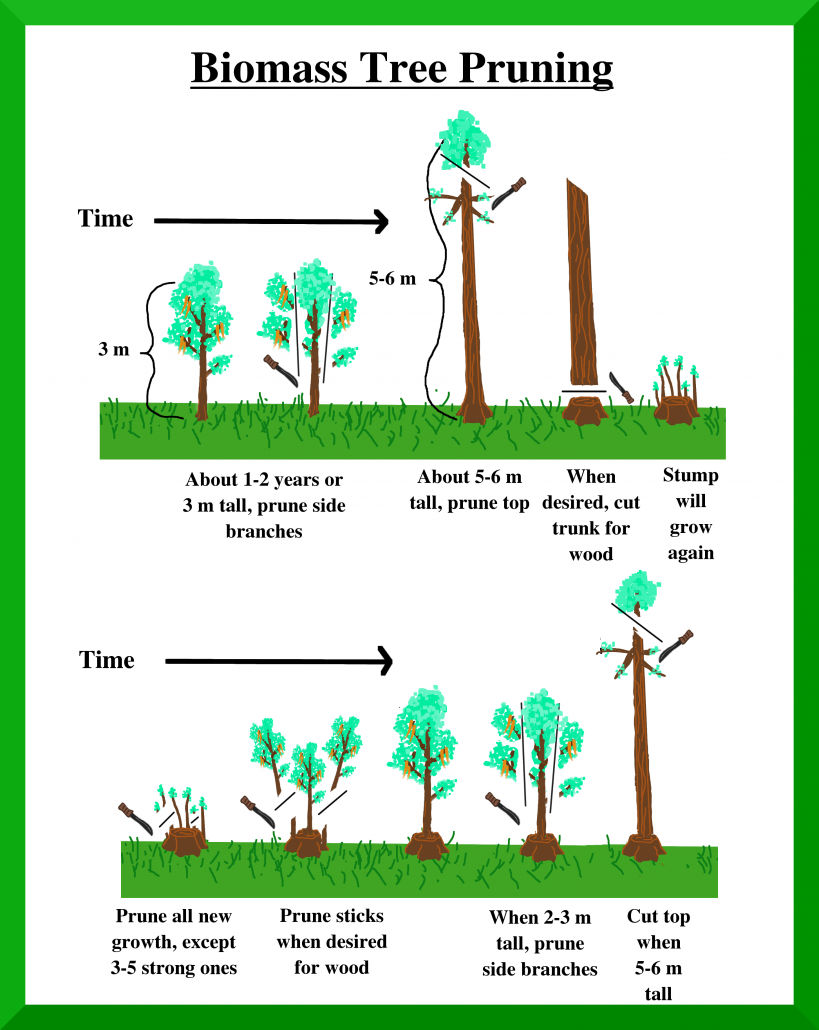 The grass can be cut by knife, hedge trimmer, grass trimmer or mower. However, the standard grass trimmer and mower cause impact damage to grass blades which substantially reduces biomass outputs. For example, mombasa cut by a standard grass mower grows about 5cm/day compared to a clean cut grass blade which can grow up to 20cm/day! The best mowers are the ones with front cutter bars which use a scissor type of action. Ernst is currently developing implements that will cut and arrange the grass in one action. Because it is difficult to find the correct equipment, often grass trimmers are used despite the impact damage. 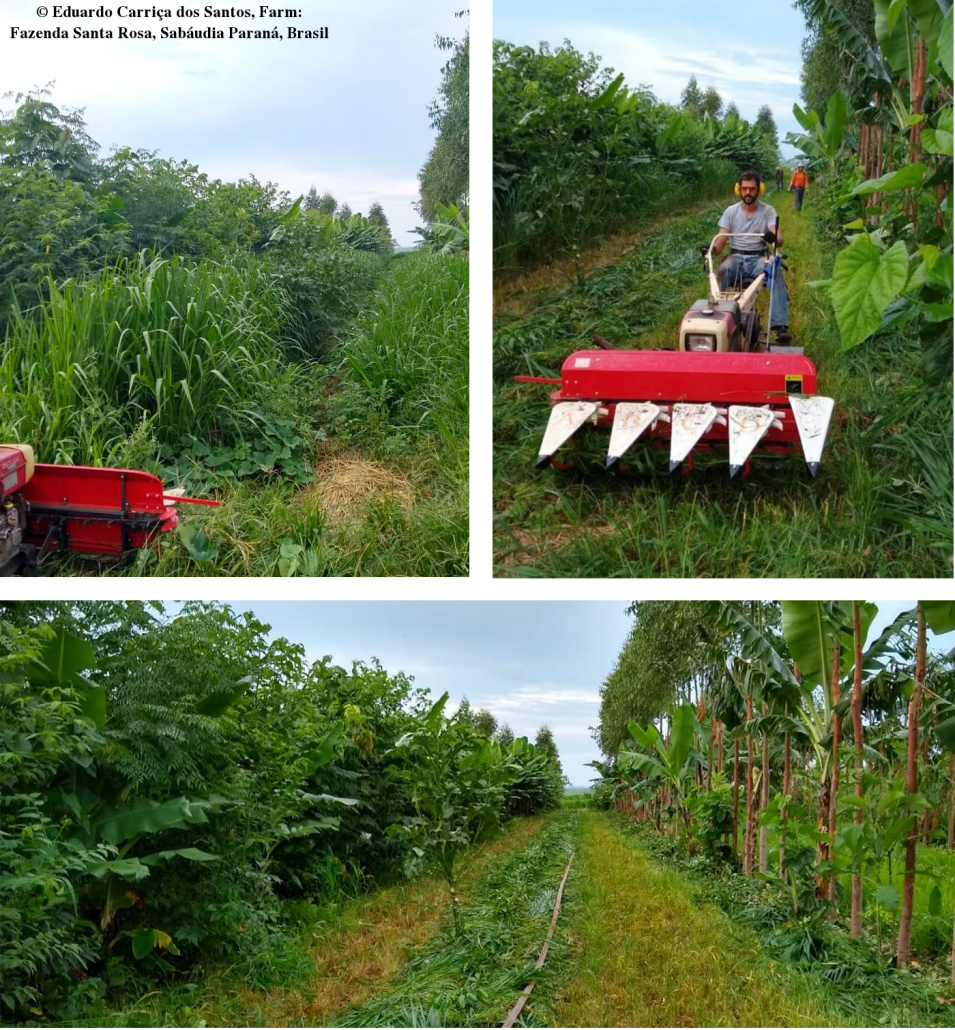 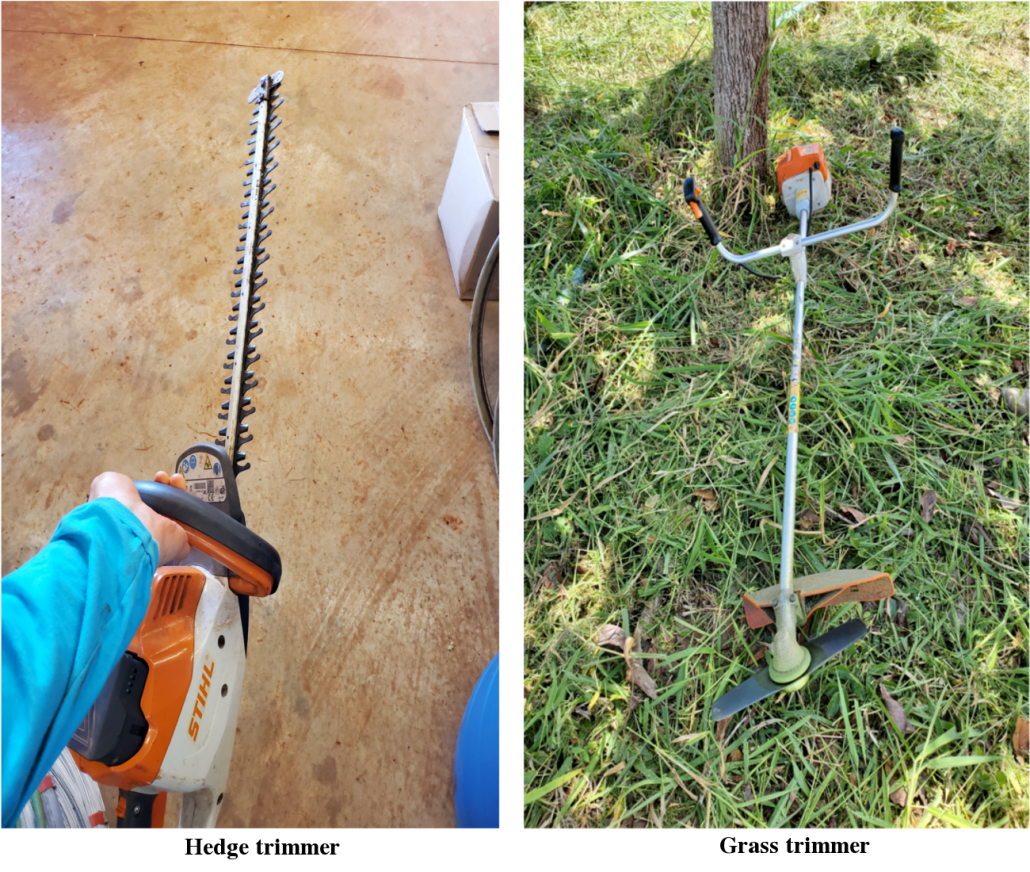 Organic matter from mombasa grass arranged in 100-120cm rows around trees. Notice the shape which creates a valley in the center.

It is important to mention that when the biomass trees are young, the banana plants will out grow them and the shade can stunt their development. At this point in the system, the bananas need to be cut (leaving a sucker for future growth) even if they have not fruited. Later when the biomass trees are taller than the bananas, then the plants can be allowed to grow fully. When it is time to harvest the for biomass, the pseudostems are cut lengthwise in half. They were placed along the tree rows, with the open half placed directly in contact with the ground in line with the tree rows. Banana leaves are placed on top. 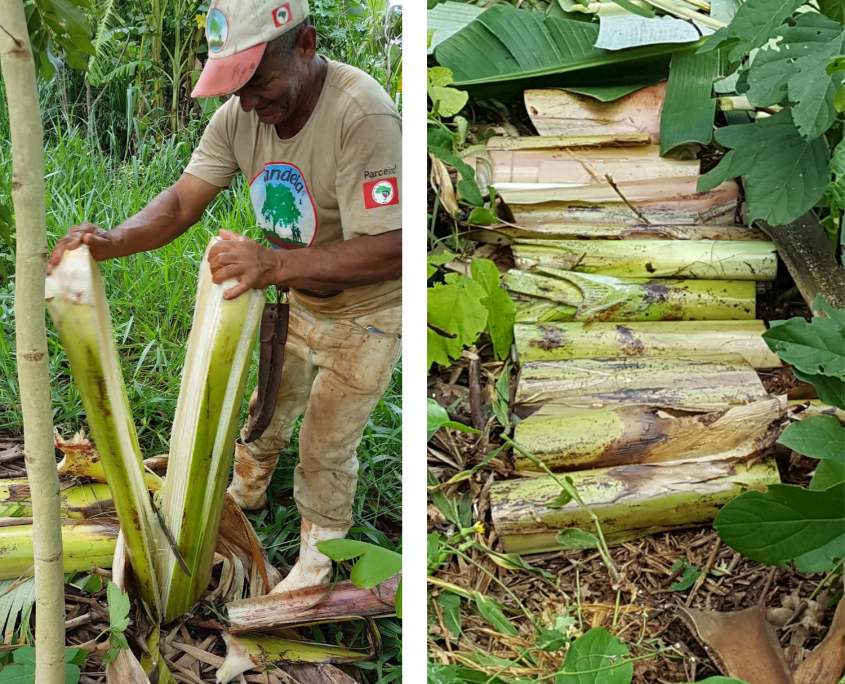 Ernst’s method of agroforestry uses a holistic perspective and some terms used to describe it have a unique meaning. This approach, for many farmers, will require a whole new way of thinking, it will represent a paradigm shift to them. It is important to be familiar with this approach before attempting to implement it.

Those familiar with this approach know that any time this method is being introduced to a new region, the farmer will be experimenting. This exact combination of trees and grass may be the best choice for them or there may be other alternative species that will thrive better and hence be more fitting. Local testing by planting small “test plots” is recommended before large scale adoption of this approach. Formal training by an experienced consultant is also needed.

Here are some potential alternative species to consider for each niche of this particular design. Remember the rows are 6-7 meters apart: