The following projects and resources came about as “side projects” to the primary syntropic farming project.  Although the farming project has the potential to create the biggest positive impact, it became clear that there were many other needs that demanded immediate attention and we were happy to do our best to help solve those problems as well.  Here are some examples:

The vetiver latrine is a very inexpensive, biological, pit latrine which can be installed with 2 days of labor.  In Haiti, the average total cost for labor and materials is about $50.  Compare this to a standard cement latrine which often costs $500!  Although this is primitive, it works.  For communities that open defecate and must deal with the fecal-oral diseases that come with lack of sanitation, such as Cholera, this is an immediately accessible solution. The vetiver grass roots stabilize the pit, so no concrete blocks are needed.  The roots also clean and digest the waste material, to prevent disease transmission.  Lastly, after about a year, the grass forms a tall thick hedge that serves as a free privacy wall.  The main expense is in the building of the concrete slab that is placed over the pit.

We have successfully helped about 300 families build their own latrines.  We provide a skilled team who can make sure the concrete work is done correctly and the pit is located in the proper place, but the families dig their pits and collect sand and gravel.  They get the benefit of sanitation along with the empowerment that comes with knowing you did it yourself.

The major obstacles with this project were that some homes had too much shade on the property, so that the vetiver grass grew poorly.  Also some families did not understand the full importance of the vetiver grass.  In some cases, they removed the grass and replanted other plants and in other cases their children or animals destroyed it.  Lastly, in some communities, the basic latrine was not accepted.  They required modifications which increased the price, such as raised seats, ventilation pipes and privacy walls.  Go to the resources page, to learn more and get a free downloadable “how to do it yourself” guidebook. 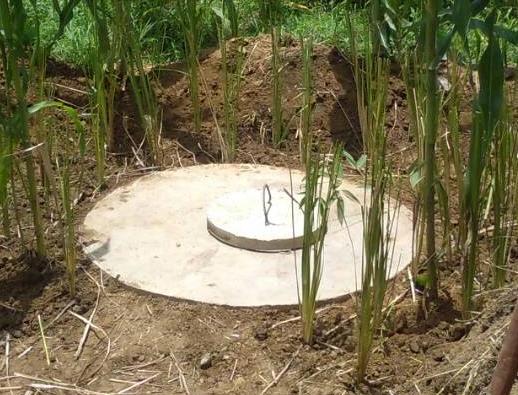 Vetiver latrine before grass is mature

An ancient remedy known by many cultures to kill stomach parasites, is now supported by clinical research.  That remedy is papaya seeds!  It can be easily grown in many developing countries, so that even the poorest have access to some of the medicine they need.  Global Freedom Project has studied the research on this remedy and created a user guide in both English and Creole to help spread the knowledge in Haiti.  Go to the resources page if you want to download it. 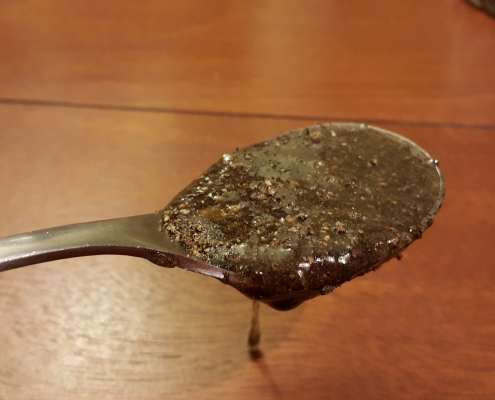 Global Freedom Project is testing different ways to preserve food grown on the farm and add value.  Our two active projects are mango drying and breadfruit flour production.  We use solar dryers, which do not require any supplement power supply, to reduce expenses.  And we use professional grade hand shredders and grinders.  These methods can help the farmer with both food security and also by helping them earn a fair income for their hard work.  Currently in Haiti, we are testing several different solar dryer designs and hope to have data to report in 2021. 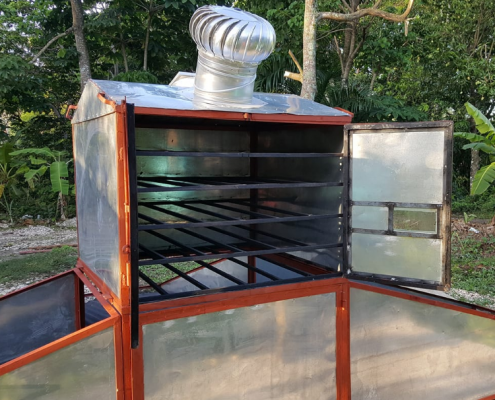 Even the simple concrete homes with tin roofs in Haiti are too expensive for the average person.  One of the most common complaints at community meetings, is not having enough money to finish building a home.  For that reason, natural building techniques could potentially offer the people a low cost alternative.  Our final conclusion with this earthbag building project was that although this is viable solution, it requires a lot more problem solving and in the end, will only make sense for certain situations.  It is unlikely to become a widespread solution for Haiti as a whole.

Global Freedom Project completed a pilot project by building a 5 X 7 meter large community center using earthbag walls.  So that the building would appeal to the people we served, we used a standard rectangular shape with cement plaster over the walls and a tin roof.  The major advantage to this method is that it is more earthquake resistant and cooler than concrete walls.  Unfortunately the cost was not less than building a concrete home and it required substantially more intensive labor.  We were disappointed by the higher than expected cost, leading us to conclude that this method would not easily become a widespread alternative.  However, there are ways the cost could be reduced.  First would be to source the earth needed in the wall construction, onsite.  We had to pay to have it excavated and transported.  The best scenario would be if there was already a need to excavate onsite, such as for a below-ground cistern, then the earth could be used to build the walls.  Second would be to use a loose stone foundation and wood top plate.  We used a cement foundation and top plate, both of which were costly.  Third we could have built the walls with less rebar reinforcement.  Lastly we could reduce the labor costs in future builds, by recipients to work for free.  Because this was an experiment for us and could have been an unsuccessful method, we felt it was right to pay for the labor and take the risk for ourselves. 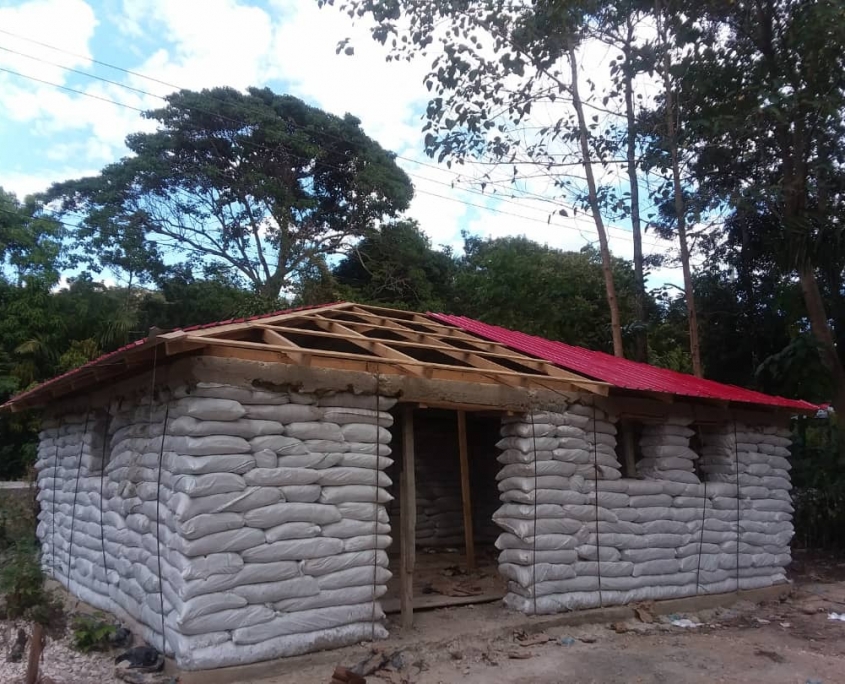 Instead of paying school fees for kids, leaving the parents dependent on Global Freedom Project, we ask the parents if they want to have their own business.  When the answer is yes, we help them come up with a feasible business plan, buy the supplies and check back on them to make sure they are successful.  One step at a time we create financial freedom.  This is one of our favorite projects and in five years, we have had 5 successful startups.  All 5 were women who wanted to make life better for their families. 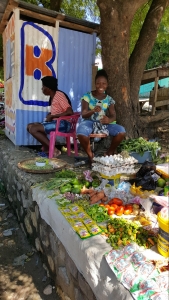 Bee keeping is a skilled trade that can really supplement a farmers income, as pure honey sells for a good price, and bee keeping can improve their crop yields because bees are excellent pollinators.  Simon, a Haitian bee keeping instructor, comes to the rural village of Bernaco and provides onsite training, so those who want to learn can get hands-on training.  This project is active, but has been limited because of a fast turn over in students.  The first student moved from the area shortly after completing the training, the second one wasn’t capable of devoting the time and energy needed to complete the training, so we are now on the third student.  As long as there is one serious student in the community, we are committed to keeping this project alive. 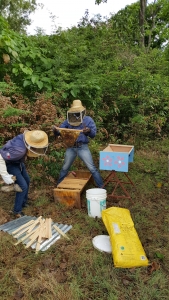 Sewing classes were offered at two rural communities, Bernaco and Sojepac, over a 3 year time frame.  We consider this a partially successful project. The initial goal was two-fold, those who were naturally skilled could turn this into a self employment opportunity and those who had basic skills could use this at home to repair clothing and become more self sustainable.  The project was successful with the second goal, but we were not able to start a small business with our graduates.  Possibly the main reason for that was because the class sizes were too large for high quality training.  All in all, we had over 80 students sign up in the beginning.  More teachers were added and criteria were enacted to make sure only serious students could continue.  We also simplified the goal to making a simple canvas shopping bag which could be exported for sale, but by that time, interest in the project had waned so that there were only 3 students left.  The project was discontinued to focus our energy and efforts in other areas that could yield greater results. 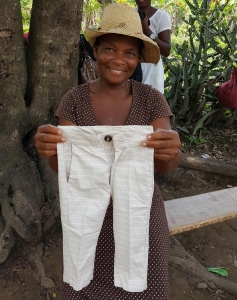 Hand sewn pants for her son.

The goal of this project is to teach the carpentry skills needed so that the people can use bamboo for basic building projects and furniture making.  Bamboo is a fast growing plant that can produce material for building far faster than trees and more sustainably.  However this project was put on hold after it became clear that the species of bamboo readily available in Haiti was not suitable.  The sugar content is very high in this variety, making it susceptible to insect attack and hence not durable.  Better quality species have been acquired and are growing at the community center in Bernaco.  Once we have enough mature bamboo available for carpentry work, this project can be restarted. 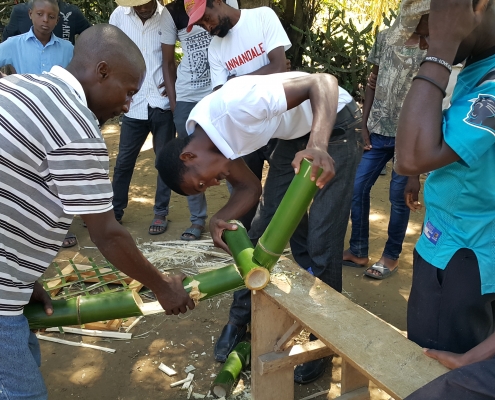 Ram pumps are a type of water pump that are capable of moving water by using only the power of gravity.  They require a source of moving water, such as a river, that has a drop in elevation.  They require no other source of power!  No need for gas or electricity.  This is promising for Haiti where the average farmer cannot afford a motorized pump.  After multiple trials at different locations, we were successfully able to construct a pump that could deliver water up a hill to some farmland.  Unfortunately we found that there are many obstacles that prevent this technology from being usable for the average farmer who lives near a river.  The biggest problem is that most of the rivers in Haiti have a shallow slope that do not generate enough power to engage the pump to work properly.  But even if there is a river with a steep slope, many of these rivers become violent during the rainy season which would require a substantial cement housing to prevent the pump from being washed away.  Lastly, theft is a constant threat and any pump and irrigation pipes would have to be installed in a way that they cannot be easily removed.  So despite this being a very promising project, after 3 years and multiple tests, in the end it was abandoned because it could not be adapted in a way to serve a large number of people. 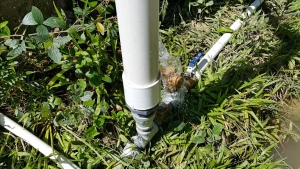